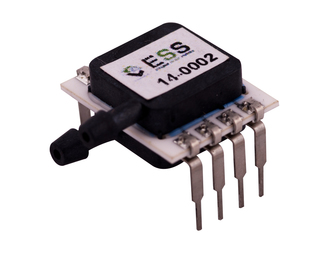 Quelle: EUROPEAN SENSOR SYSTEMS S.A.
08.11.2018 European Sensor Systems introduces the ESCP3-M1 Series, a new generation of pressure sensors based on silicon capacitive MEMS technology which is ideal for medical applications. The capacitive principle of operation has significant advantages over the widely used and established piezoresistive one. Tests have shown that the high side of a low pressure differential sensor can withstand up to x20 bar overpressure.

This is a groundbreaking advantage over conventional piezoresistive MEMS pressure sensors. The disruptive technology is further characterized by an extremely low power consumption and a very high resolution and accuracy. The sensor chip has two measuring and two reference capacitors. This architecture ensures excellent performance in terms of long term stability (zero offset, thermal offset, span offset) and rejection of common mode environmental and electronic effects. In contrast to the complex piezoresistive double-chip solutions that are available on the market, the ESCP3-M1 Series integrates everything on a sensor die, making it much cheaper and easier to produce.

Capacitive technology has already established itself in applications such as touchscreens or proximity switches and has developed rapidly in recent years, as a result of the consumer sector demanding requirements. The era for capacitive MEMS pressure sensors has already began - their technological advantages will revolutionize the pressure sensor industry in the next few years.